"A wedding gown is much more than just a dress. "It's also the embodiment of a dream," Vera Wang said.

For the majority of American brides, that dream is realised in a stunning white wedding gown. It's a seemingly eternal ritual that frequently serves as the focal focus of little girls' wedding imaginations.

The custom is thought to have originated during the Roman Republic (509 B.C. - 27 B.C. ) when brides wore a white tunic. The colour white denoted purity, representing both chastity as well as the transformation of a woman into a married Roman woman. It was also linked to Vesta, the virgin goddess of hearth, home, and family, who was served by temple priestesses dressed in unique white robes.

Most brides from the Middle Ages until the mid-nineteenth century simply wore their nicest gown or acquired a new gown that could be worn again. In a society without running water - or where clothes were hand-washed - white was just not a practical choice.

The present trend of white bridal gowns was inspired by a royal wedding ceremony. When Queen Victoria married Prince Albert on February 10, 1840, she elected not to wear the royal tradition of donning coronation robes. Instead, she chose a stylish white gown that was highlighted in newspapers and magazines all over the world.

White is now the most popular colour for most American brides, with four out of five opting to walk down the aisle in a white gown, creating a type of wedding uniform. It has become an iconic emblem of weddings, an expected component of the celebration, and despite understanding the tradition's very brief history.

Black was once thought to be a depressing hue, connected with bad omens, gloom, and death. However, such beliefs have faded in today's society, with black being one of the most preferred colours for festivals, festivities, and even weddings. It is valued for its formal appearance and has become a fashionable alternative to immaculate white tones.

Recent years have seen an increase in black themed weddings and black wedding dresses. Brides who choose these inky gowns seek to deviate from traditional rules and achieve a modern image. Black dresses are unconventional and show the bride's own personality and flair. Black wedding gowns are preferred above other colours by brides who seek a strong, sensuous, elegant, and refined look.

A white gown emphasises the traditional ideals associated with women. Some would claim that some of these are out of date in current times. Such as purity, innocence, chastity, modesty, light, goodness, flexibility, and submissiveness.

A black dress, on the other hand, indicates several qualities such as confidence, independence, strength, courage, individuality, and power.

Modern sensibilities, Elegance, Mysteriousness, Thoughtfulness, Loyalty, and so on. Neither of these colours is correct or incorrect, but in general, modern ladies who wish to move off the beaten road choose non-white wedding gowns. The most avant-garde of them wear black.

When Sarah Jessica Parker, an American actress married Matthew Broderick in 1997, she was the first to wear a black wedding gown. She isn't the only one who has abandoned the traditional white ball gown in favour of a black gown to express herself on what many consider to be one of life's most important moments. Madison Alexandra, an Instagram star, walked down the aisle in a black bridal gown she had dreamed of wearing since she was a child, and established the trend for 2021. Christine Quinn, actress of the TV show "Selling Sunset," previously wore a noir-colored gown to her 2020 wedding ceremony. 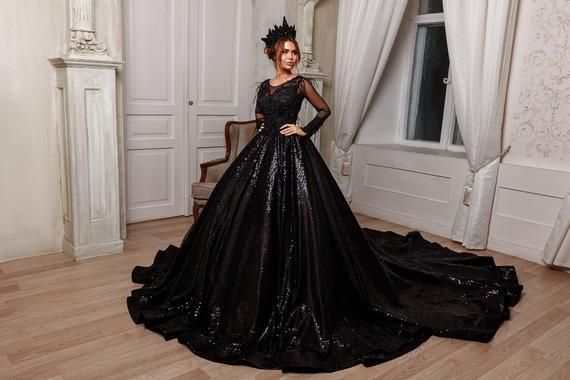 Contrary to popular belief, black is not a single hue. There are several shades of black, and they differ in terms of how dark they are. Black wedding gowns come in a number of different hues, giving women with specific colour preferences lots of alternatives.

Wedding dresses are now available in a range of hues. Brides are no longer restricted to a single hue of white. Colored wedding gowns have been elevated to the forefront of bridal fashion by designers such as Vera Wang. As a result, an increasing number of brides are breaking with tradition and selecting a gown based solely on its colour. All hues, however, have meaning. They each reflect different feelings, emotions, and states of mind.