The sale of Tri-Colour flags plummet, but is it increasing patriotism?

While the country prepares for the platinum jubilee celebrations of Independence, the mood at the country's sole Bureau of Indian Standards (BIS)-recognized national flag production plant, Karnataka Khadi Gramodyog Samyukta Sangha, Bengeri, in Hubballi, northern Karnataka, is not positive. This is the outfit in charge of providing the Tricolor to be flown atop the Red Fort.

The Karnataka Khadi Gramodyog Samyukta Sangha, formed on November 1, 1957 by a group of Gandhians, is the only entity in India authorised to produce flags. Employees in Hubballi pay close attention to the smallest details as they put together the Tricolour.

Every year, by the end of July, the Samyukta Sangha will have sent out national flags valued at a total of 2.5 crores. However, because of the Centre's change to the National Flag Code that allows flags made of polyester material, the Sangha has only got half of its regular orders. So far, it has received orders for flags worth around 1.2 crores, but the Sangha has the raw material inventories to deliver flags worth 5 crores. In anticipation of a spectacular 'Amrit Mahotsav' festival, the Samyukta Sangha set a lofty goal this year and purchased additional raw materials.

Last Monday, the Ministry of Home Affairs revised the Flag Code of India 2002 to enable the Tiranga to fly at night if hoisted in the open. Previously, it could only be hoisted between dawn and dusk.

To ensure the success of the campaign, the Union government has relaxed flag-making rules, allowing machine-made and polyester flags to be produced. Companies that create flags in bulk, such as Alok Industries, Madhuban Creation, Jetha Enterprises, and others, have seen a huge increase in orders, fueled by bulk purchases from government offices.

Deepak Naik, the proprietor of Advertising Flag, told the New Indian Express that orders had increased by 50%. Every day, the firm sells 2,000-3,000 large-sized flags, a huge rise over their regular daily sales of 500-1,000 flags. The company has reportedly employed 10-12 people to embroider the flags.

'Har Ghar Tiranga' is a campaign organised by Azadi Ka Amrit Mahotsav to encourage people to carry the Tiranga home and hoist it to commemorate India's 75th year of independence. We've always had a more official and institutional relationship with the flag than a personal one. Bringing the flag home as a country in the 75th year of independence becomes symbolic of not just a personal connection to the Tiranga but also of our dedication to nation-building. The initiative's goal is to instill patriotism in the hearts of the people and raise knowledge of the Indian National Flag. 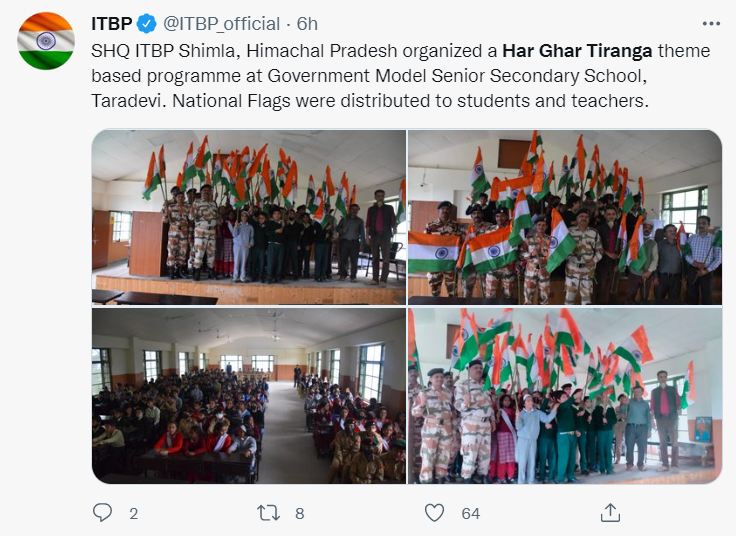 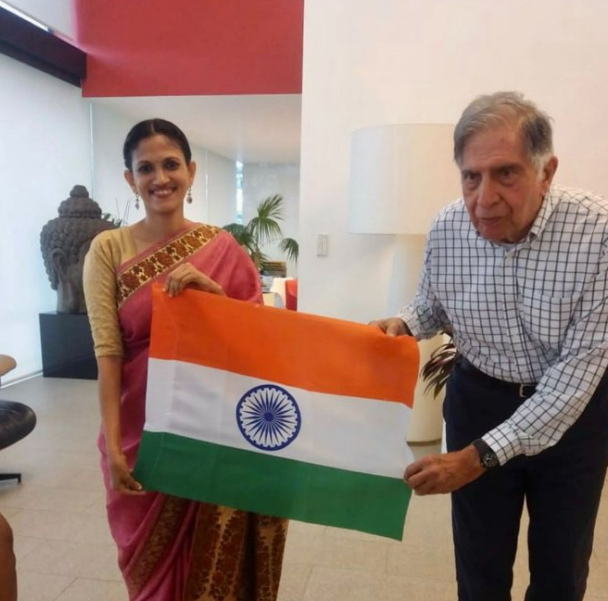 Various people have started posting about the ‘hat ghar triranga’ including Ratan Tata which has led to a sudden increase in demand for the national flag in the country. There has been an unexpected demand for the tri-colour Indian flag.

Even though the government has launched the 'Har Ghar Tiranga' campaign, there is very little demand for khadi flags made there. One reason for this is that the sizes mentioned in the campaign (20X30 inches and 16x27 inches) are not approved by the BIS' national flag guidelines. The Hubballi unit, which was recognised by BIS in 2004, strictly adheres to the Flag Code and makes only the nine specified flag sizes. BIS inspectors visit every three months to check that standards and quality are maintained. The second, and perhaps more essential, the argument is that a polyester flag is far less expensive than a khadi flag.

The following payment to the vendor based on the order made by the DCs, 15 districts of Arunachal Pradesh in the western zone would be able to receive national flags from the directorate office. According to the circular, the directorate received a total of 2,26, 000 flags from Shahi exports.

The flags must be acquired at a cost of Rs. 25 per flag, bringing the total sum due to Rs. 56,50,000. The Ministry of Textiles, Government of India, has chosen Shahi Exports as a vendor to provide flags to Arunachal Pradesh.

But there have been several complaints that the tri-colour flag manufactured by the Shahi exports is not of good quality and the size of the flag is “disrepscting” to the national flag.

The tricolour should be rectangular in form, according to the Flag. It can be "any size," but the length to height (width) ratio should be 3:2. Second, the Ashok Chakra should be positioned in the centre. Third, three horizontal stripes (saffron, white, and green) should be equal in proportion.

During a visit to a flag trader in Karnataka, I noticed that many of the flags being sold were neither rectangular nor conformed to the 3:2 ratio. Some people positioned the Ashok Chakra farther from the centre. Green stripes are bigger than saffron and white stripes on certain flags. 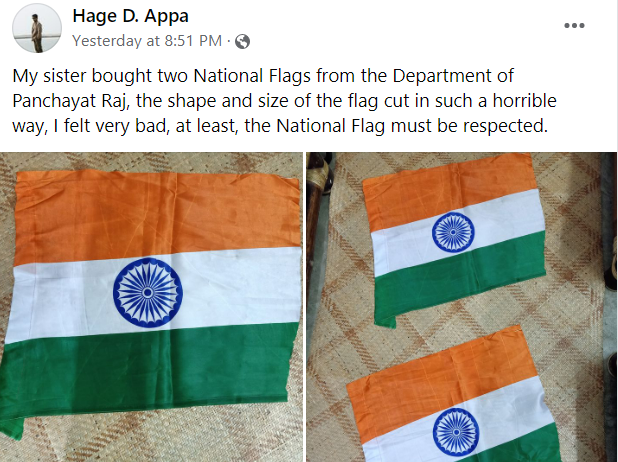 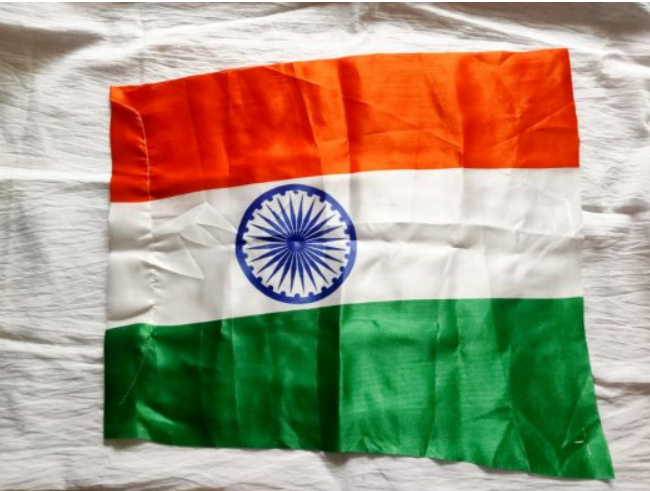 Owing to this, the government of Haryana launched the ‘no ration this month’.

According to reports, the local ration distributor in Himda village, Karnal district, Haryana, has refused to give recipients their due for this month unless they first spend Rs 20 for an Indian flag.

Ration merchants told the Wire that government officials had told them that ration distribution for this month should take place exclusively with the sale of national flags. Apparently, the sellers have already paid Rs 20 for each flag and are eager to recoup their investment.

Ration card holders have passionately opposed this move. They claim that they are already struggling to make ends meet owing to inflation and increases in the pricing of all basic products - without having to pay any more money on the national flag.