Is the world speculating a WW III? What is happening between China Taiwan and the US. After the wars that happened between the international superpowers like Russia and Ukraine, Palestine, and Isreal, things are finally going back to normal in 2022. But, the two countries that are said to be the largest superpowers in the world are on the brink of war. World countries are now speculating that these superpowers that have been in a cold war for the past few decades, may now become a real war. If this happened this would have a huge impact on the world economy which might even bankrupt a large number of countries.

Why is this happening? What triggered this possible war? How are these countries responding? What could be the impact of this on the rest of the world?

A little bit of background

United states speaker Nancy Pelosi’s visit to Taiwan is the reason the trigger for war between these two superpowers The United States and China. Nancy Pelosi, the US speaker has been visiting a number of Asian countries in the past week starting her travel by visiting Singapore and Malaysia. Against her visit to Taiwan, China has been showing its opposition by threatening to wage a war against Taiwan.

On July 25, China's foreign ministry warned that a visit by Pelosi would have "severe consequences" for which the US would be fully responsible. A few days later, on July 28, in a highly anticipated phone call with US President Joseph Biden, China's supreme leader Xi Jinping reiterated the warning, cautioning Washington against "play[ing] with fire." Zhang Jun, China's UN envoy, also condemned Pelosi's scheduled visit as "dangerous" and "provocative," and warned it will be responded with "stern and robust actions to preserve our national sovereignty and territorial integrity." As a result, both the US and Chinese militaries have taken precautionary precautions ahead of the visit.

Since the end of the Chinese Civil War in 1949, when Communist China and Taiwan parted, the waterway dividing them has been a volatile geopolitical hotspot.

The Taiwan Strait, which is only 130 kilometers (81 miles) wide at its narrowest point, is a significant international shipping passage and all that stands between now-democratic, self-ruled Taiwan and its massive authoritarian neighbor.

Although the United States has had a "one China" policy since the early 1970s, recognizing Beijing as the sole official representative of both the mainland and Taiwan, successive US administrations have maintained strong defence and diplomatic ties with the self-governing island under the Taiwan Relations Act.

After the partition of China, almost 15000 refugees travelled from China and sought shelter in Taiwan. While China claimed that, although Taiwan is geographically separated from China, it is still part of the country and hence started the territory issue between China and Taiwan. With the US being a world superpower and having diplomatic ties with Taiwan, US and China have been in a cold war since then.

Despite the Biden administration's reservations, Ms. Pelosi was greeted warmly in Taipei and was welcomed with broad bipartisan backing in Washington. Her trip, however, has infuriated Beijing and Chinese nationalists, complicating already tense ties even after she departs.

Already, China is preparing major displays of force in the Taiwan Strait to demonstrate that its claims to the island are unassailable. And, as the United States pushes on with pro-Taiwan protests, arms sales, and diplomatic pressure, the dangers of military conflict, deliberate or not, have increased.

Speaker Nancy Pelosi's travel to Taiwan now threatens to disrupt the White House's drive, leaving supporters wondering what harm had been done to the president's united front in Asia.

The danger is that the tour, which will also include visits to South Korea and Japan this week, would be an unneeded distraction from the allies' efforts to resist China's military power and economic dominance.

While US allies have generally been silent on the visit thus far, there is a perception among America's allies that they were left out in the cold while China threatened the US and Taiwan, the self-governed island that China claims as its own.

The handling of Ms. Pelosi's visit was concerning because, whether purposefully or unintentionally, it demonstrated China's influence while diminishing the role of friends, according to Seong-Hyon Lee, a South Korean fellow at Harvard University's Fairbank Center for Chinese Studies.

Hua Chunying spokesperson for the Ministry of Foreign Affairs of the People's Republic of China stated that the US speaker Ms. Pelosi's reckless provocation is simply for personal political gain, which is an awful abomination of a political farce. Relationships between China and the United States are deteriorating, as are regional peace and stability. The timing of the visit may have added to the tensions. It comes ahead of this year's Chinese Communist Party Congress, during which President Xi Jinping will aim to consolidate his authority by taking a hard position on Taiwan in order to deflect internal criticism on COVID-19, the economy, and other concerns.

Today, according to a Reuters report, The Chinese military has completed missile shooting drills off the east coast of Taiwan.

China's Eastern Theatre Command announced Thursday that it has conducted numerous firings of conventional missiles near the eastern coast of Taiwan as part of planned drills. 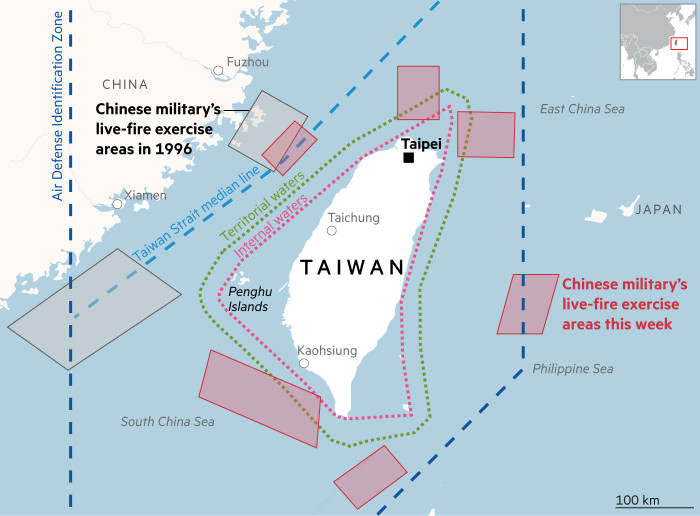 After the fire was finished, the applicable maritime and airspace controls were released, according to an Eastern Theater Command official.

According to an internal Taiwan security report obtained by Reuters and corroborated by a security source, China launched two missiles toward Taiwan's Matsu islands, which lay off the coast of China, at approximately 2 p.m. local time and headed in the direction of the no.2 and no.3 exercise zones indicated by China.

Southeast Asian foreign ministers urged restraint on Thursday as China began large military exercises off the coast of Taiwan, warning that the situation might escalate into "open warfare." Beijing has launched its largest-ever drills surrounding Taiwan in reaction to US House Speaker Nancy Pelosi's visit to the self-ruled island this week. Ministers from the Association of Southeast Asian Nations (ASEAN) gathering in Phnom Penh have issued a warning against "provocative conduct." In a joint statement issued Thursday, the ministers warned that the situation "may lead to miscalculation, significant confrontation, open confrontations, and unforeseeable repercussions among key nations."