This evening, an Indian Air Force twin-seater Mig-21 trainer aircraft took off from Utarlai air station in Rajasthan for a training mission.

Senior authorities from the air force and the district administration, including the collector and superintendent of police from Barmer, arrived at the scene.

The deceased pilots were Wing Commander Rana and Flight Lt Advitiya Bal. The pilots diverted the aircraft to an empty field to avoid damage to lives and property.

The Indian Airforce tweeted around 10:51 about the incident. 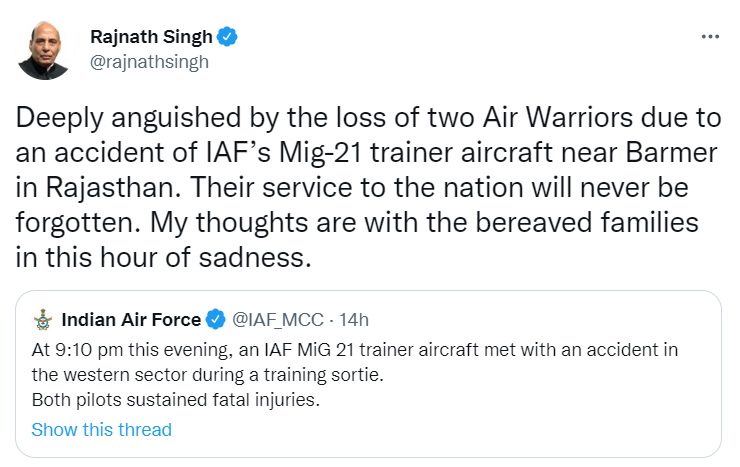 Defence Minister of India Rajnath Singh tweeted on his Twitter page about the accident and deeply regretted the incident. “Deeply anguished by the loss of two Air Warriors due to an accident of IAF’s Mig 21 trainer aircraft near Barmer in Rajasthan. Their service to the nation will never be forgotten. My thoughts are with bereaved families in this hour of sadness.”

Lt. Governor of Jammu and Kashmir tweeted “Deeply pained by the loss of two IAF's Braveheart's Wg Cdr M Rana and Flt Lt Advitiya Bal in a Mig-21 trainer crash near Barmer in Rajasthan. Flt Lt Advitiya was a budding fighter pilot from Jammu. In this moment of grief, my thoughts & prayers are with the bereaved families.”

Images from the scene showed flames erupting from a wrecked plane. The airplane wreckage was scattered across a radius of 0.5 kilometers. According to eyewitnesses, one of the pilots' bodies was fully burnt, while the other's was seriously wounded. Some people even posted horrific images of the doomed fighter plane on social media.