Having extended the record of Chinese astronauts' longest stay in space in a single flight mission to 90 days, the Shenzhou-12 mission crew returned to Earth at the designated Dongfeng landing site in the Gobi Desert, North China's Inner Mongolia Autonomous Region on Friday, marking a successful conclusion of the first crewed mission at the country's space station building stage.
The Shenzhou-12 return module has separated from the orbiting module at 12:43 pm on Friday, and was then followed by a smooth separation from the propellant, according to the China Manned Space Agency (CMSA).
Carrying the three taikonauts – mission commander Nie Haisheng, and his fellow crew members Liu Boming and Tang Hongbo – the return capsule touched down at the landing site as of 1:34 pm. 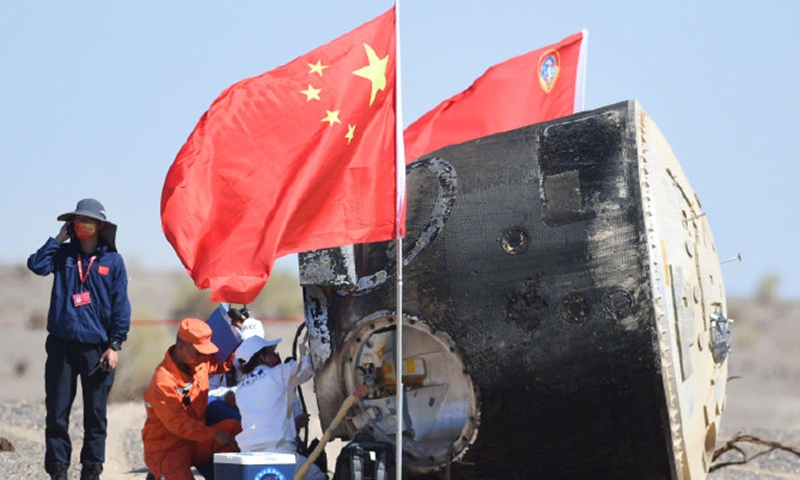 The homecoming heroes did not have to wait too long before the search and rescue squad with the Dongfeng landing site reached them after their landing.
They were confirmed in good condition after they touched down safely at the Dongfeng landing site.
The whole process was so smooth that Tang Hongbo was seen playing with a pen during the process of returning Earth.
"Real gold fears no fire," Nie Haisheng joked with his fellow crew, citing a Chinese proverb as they re-entered the Earth's atmosphere.
It also marked the first time the Dongfeng site has received a returning Shenzhou mission, taking the place of the Siziwang Banner site, the traditional go-to landing site for China's manned space flights. The choice of landing site was based on a number of factors, including climate, topography, returning options, and rescue and search equipment, Pang Zhihao, a Beijing-based space expert and retired researcher from the China Academy of Space Technology, told the Global Times on Friday.
This return was more difficult than previous missions, Pang noted, as the previous ones all had fixed returning points in orbit, while that of Shenzhou-12, which was attached to the space station, had a changing orbital altitude. What's more, Shenzhou-12 was to return to a different spot from previous times in order to test the search and rescue capabilities of the Dongfeng landing site.
The site is partly surrounded by desert, with a dry desert climate and little rainfall. "As there are mountains and pitted terrain in the area, the search and rescue work was much more challenging," Pang noted.
The safe landing of the return capsule also marked the successful completion of the Shenzhou-12 mission.
"Shenzhou-12 has demonstrated China's capability to perform prolonged human spaceflight missions, including lengthy and challenging operations like extravehicular activities and providing necessary ground support," Andrew Jones, a Finland-based correspondent for space.com and spacenews.com who closely follows China's space industry, told the Global Times. Upcoming missions
China will carry out two more space launches for the building of its own space station this year - the Tianzhou-3 cargo spacecraft via a Long March-7 carrier rocket from Wenchang spaceport in Hainan and another manned flight on a Shenzhou-13 spacecraft via a Long March-2F rocket from Jiuquan center.
An official update by the CMSA on Thursday said that the combo of Tianzhou-3 and Long March 7 Y4 rocket has rolled out to the launch pad in Wenchang and will take off at a suitable time. The Tianzhou-3 mission will be the second supply shipping mission to the Tianhe core module following the first by the Tianzhou-2 on May 29.
Following the Tianzhou-3 mission, the Shenzhou-13 manned spacecraft is expected to send another crew of three taikonauts to China's space station complex, which may include the first female taikonaut in the space station building stage. They will live and work in orbit for an even longer stay of six months.
Wang Yaping, who beamed down live from space to 330 elementary and middle school students in Beijing when she was in space onboard the nation's Tiangong-1 space lab module in 2013 and served as the back-up astronaut for the Shenzhou-12 crew, is widely believed to be among the most likely candidates for the mission.
According to mission insiders, the Shenzhou-13 manned space mission will also conduct an R-Bar, also known as vertical docking, with the space station complex, a first at the space station building stage.
Yao Yuanfu, the chief designer of the rendezvous and docking microwave radar system onboard the Shenzhou-13 spacecraft, told the Global Times in an exclusive interview that the spacecraft will face a much more complicated electromagnetic environment than the Shenzhou-12 in its docking mission, as by then the space station complex will have more spacecraft docked than it did before Shenzhou-12's docking and the new docking direction adds to the complexity of the mission.
The institute's radar project has participated in China's heavyweight space programs such as the Chang'e lunar probe as well as Tianwen-1 Mars exploration, and the success of the missions have been a source of confidence for Yao and his team for the Shenzhou-13's successful docking down the road.
The Shenzhou-12 spacecraft also pulled off a vertical docking experiment shortly after separating from the Tianhe core module on Thursday to verify the capability.
Although there has been no official announcement, Shenzhou-13 is expected to be launched in a few weeks given that the Tianhe core cabin cannot be left unattended for a long time, observers noted.
Open, inclusive
Space agencies around the world have put more faith in China becoming a strong space power and they hope to collaborate with China on the space station in terms of manned spaceflights and scientific experimental loads, as the space station may be the only operational one in orbit if the International Space Station (ISS) retires after 2024.
“The construction of the space station is a complex and intensive project. Its completion would be a demonstration of China's ability to execute complex, long-term space projects. It will also bring opportunities for science and international collaboration,” Jones commented, “while also posing challenges to some space agencies in terms of determining their priorities and resources for space activities.”
China has been engaged in exchange and cooperation with international space agencies including Russia's Roscosmos and the European Space Agency (ESA), which played a positive role in the construction of China's space station. "We are willing to work with any space institutes that are peace-loving and devoted to the peaceful use of space," said Hao Chun, director of the China Manned Space Agency.
Hao also disclosed that "there will be foreign astronauts participating in China's manned space flights, and working and staying in China's space station."
"Many of them have been learning Chinese for this purpose. And China will carry out work to select foreign astronauts for joint flight missions as our construction of the space station proceeds," he said.
Compared to the US-dominated ISS, which has been more of a party of powers, China's space station will be more inclusive in getting developing countries involved, and will provide a platform for anyone on the basis of equality, win-win cooperation and mutual respect, space observers noted.
The first batch of a total of nine international scientific experiments from 17 countries and 23 research bodies have been selected to be carried onboard China’s space station, which is expected to be operational by 2022. The first batch includes Gamma-ray burst polarimetry jointly proposed by Switzerland, Poland, Germany and China and a spectroscopic investigation of nebular gas by India and Russia.
Source: THE SPACE
https://www.space.com/shenzhou-12-astronaut-mission-lands-safely